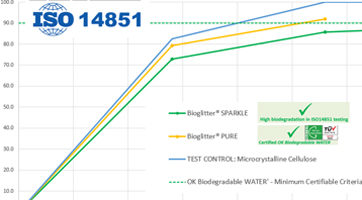 The table below provides an illustration of the hierarchy of different levels of biodegradability testing available, relevant to different environments.  It is essential that the glitter is tested in its finished form (ie with coating) at this is what will be entering the natural environment.  Proving Bioglitter™ biodegradability in  credentials in a challenging environment indicates more favourable results in less challenging conditions.  Testing at a Fresh Water biodegradability level is a harder test than at a home composting level.

Industrial composting EN13432 is the testing level often referred to but it’s irrelevant when it comes to glitter.  Glitter is too small in particle size to control where it goes and is known to contribute to natural environmental pollution.  Not only the end product needs to be considered, but, also how the glitter is used throughout the supply chain is very important as there are many opportunities for glitter particles to get into the natural environment.  Industrial composting is conducted in man-made conditions at around 60 Deg Celcius (140 Deg Fahrenheit) and at high humidity.

ECHA (European Chemicals Authority) after a very detailed study have concluded that a polymer product is NOT MICROPLASTIC if it can biodegrade in natural freshwater conditions and passes ISO14851 testing.  This will form the basis of legislation for industries using single-use microplastic products.

In other words, if a glitter passes ISO14851 and has TÜV, ‘OK biodegradable WATER’ certification it is Microplastic Free.  The testing science is the ONLY way to determine this.

Glitters that are only compostable are microplastic.  It’s a sideways step that’s no better than polyester and if they get into the environment cause microplastic pollution.  The reality could be that compostable glitters are even worse than polyester glitters as they mislead the user thinking they could be safe if they get into the environment and lead to more carefree use. Resulting in consumers thinking they are doing something good when the reality is they are actually doing the complete opposite.

In terms of glitter microplastic pollution in marine environments,  the vast majority of this has entered via: wastewater – water treatment – fresh water (streams and rivers) then eventually into marine.  A lesser amount though soil, land runoff into streams and rivers and eventually into marine.  A glitter that can biodegrade in the more difficult natural, freshwater environment means it will biodegrade even faster in all the easier environments to biodegrade… water treatment, soil and wastewater and therefore be biodegrading as it makes its way.

Considering the above and following close consultation with our accredited testing partner OWS, Belgium, it was decided freshwater biodegradability testing to ISO 14851 was most appropriate.  The decision on this test method was based on the nature of our material (insoluble solid as opposed to a chemical), the most probable end of life scenarios for Bioglitter™ (as detailed above) and TÜV’s acceptance of data generated from this test for their trusted ‘OK biodegradable WATER’ certification program.

The ISO14851 biodegradation test determines the degree of aerobic biodegradability of the test samples by exposure to micro-organisms in a water-based medium (under laboratory conditions) representative of the natural environment, such as rivers, streams or lakes.  During the aerobic biodegradation of biodegradable materials, oxygen is consumed and carbon in the material is converted to carbon dioxide (CO2) by the microbes. The amount of biodegradation can be calculated from how much carbon is converted to CO2 compared with the test control, pure natural cellulose (microcrystalline cellulose), which is well known to biodegrade extremely well in the natural environment.  Products with biodegradability performance of at least 90% of pure natural cellulose are freshwater biodegradable and pass the ISO14851 test.  There are no half measure with this standard a product either passes or not.

The test results as illustrated in the chart above demonstrate the vast majority of both Bioglitter™ SPARKLE and Bioglitter™ PURE biodegrades in a freshwater environment in only 4 weeks.  It also proves that the coating applied in the manufacture of Bioglitter™ does not compromise the performance characteristics of the Modified Regenerated Cellulose core to biodegrade.