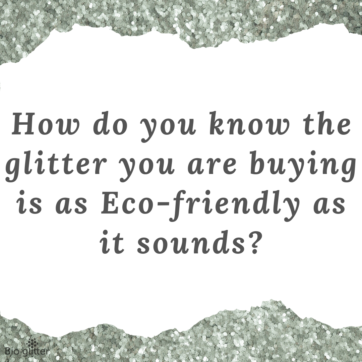 Cutting through the eco glitter jargon; compostable, biodegradable, plastic free, microplastic……. What does it all mean?

Stephen Cotton, director of Ronald Britton Ltd, the creators of the world’s most eco-friendly glitter brand, Bioglitter™, talks us through the glitter pollution issue, and how to cut through the jargon to know the products you are buying are really as good as they sound, eco-friendly and in line with the way legislation is heading….

It’s hard to miss all the focus on glitter and its link to microplastic pollution that, for the last few years has been all over the internet and in the news.

The result of all this bad press has been a big surge in demand for environmentally friendly glitters, but this has led to a similar increase in “green jargon” around products with terms such as composability, biodegradability and plastic free, often used to make products appear eco-friendly.

What I really wanted to do with this article is cut through the jargon, so people aren’t being ‘greenwashed’ and buying glitter which is still an environmental pollutant.

When you cut through all the jargon, the plastic pollution issue created by glitter and what to look for is relatively simple:

Glitter is small and gets everywhere

A big problem with glitter, unlike things like packaging for example, is that we can’t reliably control where it ends up. It’s small and easily gets into the natural environment, whether via the more obvious routes, when washing off cosmetics or toiletries, to the less obvious,  for example cleaning up manufacturing equipment after printing or flower decoration, even a school washing up after an art class.  Because we can’t control where all these small microplastic particles go there is a very high probability of them entering waste water and eventually getting into the natural environment.  It’s easy to think that compostable glitter is a possible solution, but it’s not.  Glitter particles are too small, most often being flushed out into our countryside and waterways with no realistic chance of ever being put in a compost bin.  This means any eco-friendly glitter needs to be able to biodegrade naturally in the environment.

What it’s made from isn’t important, how it biodegrades is

Whatever glitter you buy, whether it’s Bioglitter™ or any other kind, they are all made of polymers.  These polymers can be made from products like plastic (polyester) or bioplastic or modified natural polymers like PLA, cellulose acetate, pulan, regenerated cellulose…. etc.

This is often where people get greenwashed, if a product is sold as being “plastic free” and made from a natural modified polymer like some forms of cellulose for instance, it’s perceived as being greener.  What the product is made from isn’t important, but how and where it biodegrades is.  For example, not all forms of cellulose derived polymers biodegrade in the natural environment.

Biodegradable is another term that gets thrown around in the industry, but the term itself means nothing, what’s important is where it biodegrades, how long it takes and how much biodegrades.  If it takes 100 years to biodegrade, if just a small percentage biodegrades or if it needs special composting conditions, then it’s not eco-friendly in terms of the natural environment and environmental pollution.

Any polymers that don’t biodegrade in the natural environment equivalent to freshwater biodegradability standards are microplastic, as defined by ECHA, European Chemicals Authority.  This indicates the direction of travel for future microplastic legislation.

So, glitter polymers that are only compostable or only biodegrade in soil or wastewater environments are all microplastics.

When it comes to glitter, the only thing to look for is to see if there is testing evidence that the product biodegrades over a short period of time in freshwater.  Look for independent certification from organisations like TÜV’s OK Biodegradable WATER certification program.  As well as natural, freshwater biodegradability, it also assesses using ethical methods if a product is eco toxic.

If a glitter is NOT TÜV certified OK Biodegradable WATER, then you have a glitter that contains microplastic.

A bit about us, the Bioglitter™ journey

At Ronald Britton we’ve spent almost a decade developing Bioglitter™ with the aim to pass the test for freshwater biodegradability and we’ve achieved this with our Bioglitter™ PURE Product and aim to achieve it with our upgraded Bioglitter™ SPARKLE product in Spring.

Both SPARKLE and PURE are based on a unique regenerated cellulose core but each has a different surface coating to produce different effects:

Bioglitter™ PURE, comprises a range of novel glitter effects including the Iridescent OPAL and Vivid effects, launched in February 2020.  Bioglitter™ PURE products are TÜV ‘OK Biodegradable WATER’ certified and are the only certified glitters in the world, soon to be joined by Bioglitter™ SPARKLE products.

Bioglitter™ SPARKLE, comprises a comprehensive range of bright metallic glitters indistinguishable in appearance to traditional glitter.  Currently, SPARKLE contains a small amount of synthetic polymer and in independent testing is only 3% off the biodegradable criteria to achieve freshwater certification.

It’s been an incredible journey so far and we’ve been working with major brands like Primark, T-Zone and Monsoon Accessorize to set up a scheme to ensure consumers know the sparkles they buy are actually environmentally friendly.  Through a licencing scheme, we allow authorised brands to use our very recognisable and protected Bioglitter™ Logo.  This is to help consumers make an informed decision and know that the glitter is genuine Bioglitter™, which means it is eco-friendly.  Bioglitter™ branding has now attracted the attention of some of the largest international consumer brands on the planet.

Freshwater biodegradability certification is the benchmark

So, if I can achieve one thing from this article, it’s to move the industry to focus on just one aspect with glitter, not to fixate on what it’s made from or jargon around biodegradability, but whether it has independent freshwater certification, i.e. TÜV’s ‘OK Biodegradable WATER’ certification.  This is the benchmark of knowing whether a glitter is really as eco-friendly as it sounds.