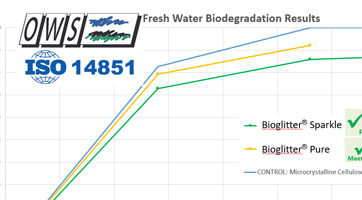 It is with great pleasure that we are delighted to announce that our Bioglitter has officially been named as the most eco-friendly glitter in the world!

Having undergone weeks of independent testing, OWS, an independent biodegradability testing organisation, has confirmed that Bioglitter® sets a new environmental standard for sparkles.

Results from the OWS show that Bioglitter degrades in the natural environment, in only four weeks, tremendous news!

During testing a competitor glitter manufactured from PLA showed no evidence of degradation during the same time period which really does highlight the importance of using Bioglitter!

Bioglitter’s very own, Stephen Cotton, had this to say on the results: “We tested in freshwater, ISO 14851 which is the equivalent of river or lake water. This was a realistic test based on one of the most challenging natural environments and results showed that the biodegradable content in Bioglitter broke down within four weeks.

“Results did confirm exactly what was expected but it’s still extremely pleasing to see.”

As everybody knows, Bioglitter replaces the use of plastics in the core of glitter with a plant based product, cellulose.

This special form of cellulose, unique to Bioglitter, is stable and won’t degrade on the shelf, however once it enters soil, compost or waste water environments, where microorganisms are present, the glitter will naturally decompose.

Stephen added: “The issue of plastic waste and microplastics is something we’ve been thinking about and working towards tackling in glitter for over a decade.

“We’ve spent several years in research and development and our first product, Bioglitter Sparkle, represents the first naturally degradable glitter on the market.”