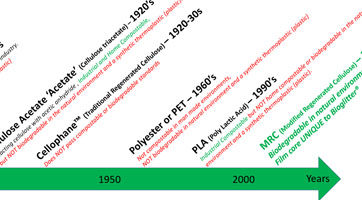 What is Cellulose and are all forms of Cellulose the same?

Cellulose is the substance that makes up most of a plant’s cell walls. Since it is made by all plants, it is probably the most abundant organic (carbon-containing) compound on Earth. Cellulose is a polysaccharide. A polysaccharide is a type of carbohydrate.

All forms of ‘cellulose’ are NOT the same an have very different properties;

However, from a biodegradability performance point of view there is a very considerable difference.

Below is more detail on these materials and information our view on their suitability to be used in Bioglitter™.

Celluloid is generally considered the first synthetic thermoplastic, becoming commercially available in the 1860’s. It was the first picture or photographic film, however, it was found to be highly flammable and as a result very dangerous.

Cellulose Acetate or Cellulose Triacetate is also more commonly known as Acetate. It is made by reacting cellulose with acetic anhydride to produce a new substance, Cellulose Acetate. It was developed as a safer alternative to Celluloid and became commercially available in the 1920’s. Cellulose Acetate is industrial and home compostable, BUT, it does not biodegrade in the natural environment and is also a synthetic thermoplastic.

Regenerated Cellulose was Introduced in the 1930s as a transparent film used in food wraps and candy wraps. In the 1960s-1970s with the advent of lower cost and easier to handle oil derived plastic films such a polyester, polythene etc, it became less popular. In the US and some other countries “Cellophane” has become genericized, and is often used informally to refer to a wide variety of plastic film products, even those not made of cellulose, such as plastic wrap. It was assumed that traditionally regenerated cellulose, as it was based on cellulose, would have good biodegradability characteristics, however, when put to the test it was found that this form of cellulose film had very poor biodegradability performance.

A hi-tech and modern version of traditional regenerated cellulose unique to Bioglitter™.  Natural cellulose is extracted from wood pulp, the prefered type being eucalyptus and then the cellulose is regenerated by casting into a clear film.  Specifically developed and designed to biodegrade quickly and safely.

Summary – Even though some have the word ‘cellulose’ in the name or derived in some way from cellulose they are all completely different in biodegradability performance.